With CENSEO’s recent growth, our team has been focusing on the importance of working together effectively. After researching our options, we decided to make a trip over the Pali to Honolulu for a Wine & Design company outing. An evening of pupus and paint was exactly what we needed for company bonding and social time outside of the workplace.

Wine & Design’s corporate painting party package is a bit different than the traditional paint night, which was a big part of the entertainment!

Only one member of our team knew that our canvases would be placed together to make giant painting of the Mokes (because someone had to select our design). All other team members had only a piece of the puzzle to paint from. Some puzzle pieces were simple, while others were more complex with pieces of the islands or plumerias in the scene. It was mysterious and felt a little intimidating for those who were expecting a normal night of painting instruction.

After painting our single canvases for only a few minutes, we were asked to stop and move to someone else’s easel. It felt strange, painting on someone else’s work, but after a few rotations we started to realize that the overall result was quite beneficial. The look and feel of each canvas was coming together. In the end, we lined up all six canvases on the table and corrected our mistakes. A couple paintings (the more intricate ones) still needed finishing details, so we were able to choose our top talent to help out with the tricky parts.

Our team agreed that this was probably the most enjoyable and educational team building activity we had participated in AND we now have a beautiful mural in our office space. I think we’re all pretty proud of our accomplishment! 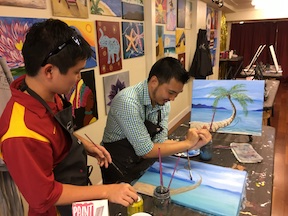 Art Breaker
The icebreaker, or “artbreaker”, was our initial warm-up. We divided into two teams and drew secret assignments out of a jar. The jar was full of communication blockers and disabilities. Some of us could not talk or use our hands, others had to be bossy or defiant. It was tricky to understand some of the roles, such as the person doing exactly the opposite of what was directed. It led to some major difficulties in painting the assigned scene, and there wasn’t time for any one member to finish the painting on their own. Our teams did a decent job, considering, and laughing at the silly, out-of-character behaviors was most of the fun! 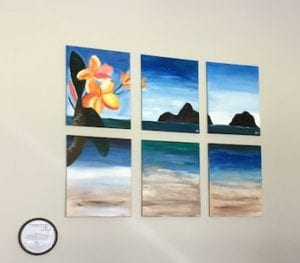 Corporate Painting
Not knowing what the finished art was going to look like was a great mystery. It forced everyone to follow the guidelines for their own canvas closely. When our own canvas became someone else’s canvas too, it shed new light on the process. As we continued to work on others’ paintings, we realized the many techniques and skills that were coming together. The final product was impressive, and the time spent on finishing details pulled everything together. I think we were all impressed at how far we had come in just a short amount of time. The instructor explained the teamwork skills we were developing and made observations of our specific team’s ability to work together. Her hilarious sense of humor and wit assured that we were all laughing the entire time.

Sound Advice in a World Full of Noise.

About the Author: CENSEO